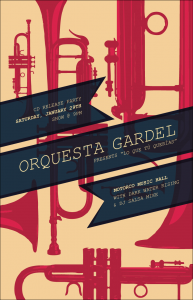 One of our favorite large bands on the scene today is Darcy James Argue’s Secret Society.  ‘Gig postmortem’ is a term respectfully borrowed from their own steampunk way of sharing their music.  Last night’s CD release party will certainly go down in the annals of GarDel history.  Though it was only our first time headlining a show at a music venue, it sold out just as GarDel took the stage.  Not only that, but at least 50 people stayed outside to listen and dance, waiting for the first opportunity to get in!  Needless to say, we were elated and went on to show our gratitude with a high-energy power set that included the live premiere of two original songs, Esta Situación and Gracias Te Doy.  We played both rather closely to the recorded versions  and look forward to opening them up over time.

Also notable was having all thirteen members together on one stage.  Often Ramon, Julio, Jose and Brevan rotate through the three percussion chairs, rendering GarDel as a 12-piece, but we love putting Ramon and his smiling face up front with Jaime and Nelson as often as everyone is available.  Somewhere out there in the crowd were some members of the Jazz at Lincoln Center Orchestra who were in town for a show at UNC.  Carolina is also bringing down Eddie Palmieri in a few weeks.  With the number of songs of his we interpret, you’d better believe we will be in attendance.

Our deepest thanks go out to Dark Water Rising for coming up from Fayetteville to open the show.  A teensy minority of the dancers might have been skeptical of a non-salsa band, but Charly’s powerful vocals quickly won the outliers over.

Pictures and video are forthcoming, we can see some fans have already posted some.  Please share the links to your pics below in the comments!  We’ll be announcing a special feature soon with our new friends at salsamerengue.com.

One of the other cool things that the Secret Society does is post music from each of their live shows for free.  In that spirit, here is last night’s version of “Lo Que Tú Quierías”, expertly mixed from the board by Motorco’s own Robbie.